It's all in the Mac magic…

The terminal numberings found on a relay body are taken from DIN 72552 which is a German automotive industry standard that has been widely adopted and allocates a numeric code to various types of electrical terminals found in vehicles. The terminals on the outside of a 4 or 5 pin mini relay are marked with numbers as shown below: 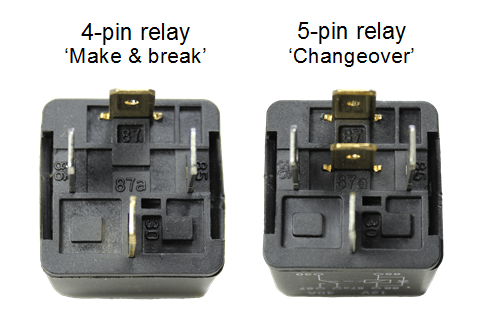 According to DIN 72552 the coil should be fed with +12V to terminal 86 and grounded via terminal 85, however in practice it makes no difference which way around they are wired, unless you are using a relay with an integrated diode (see more info on diodes below).

Tip: you can use a changeover relay in place of a make & break relay by just leaving either the NO or NC terminal disconnected (depending on whether you want the circuit to be made or broken when you energise the relay).

The automotive ISO mini relays we have been looking at above are typically available in two types of pin layout designated Type A and Type B layouts. These layouts are shown on the two 5-pin relays below (pin 87a not present on 4 pin relays): 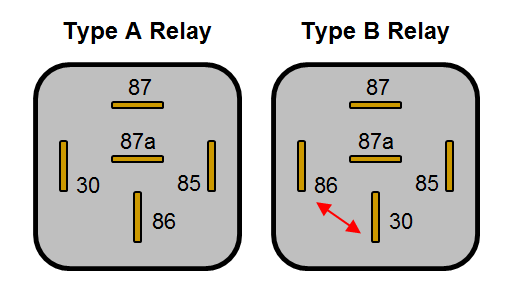 You will notice that on the Type B layout pins 86 and 30 are swapped over compared with the Type A layout. The Type B layout is arguably easier to work with as the connected terminals are in-line, making the wiring easier to visualise. If you need to replace a relay make sure you use one with the same terminal layout as it is easy to overlook if you’re not aware of the difference.

The terminal widths used on 4 and 5 pin relays are almost always 6.3mm wide, however some more specialist relays can have terminal widths of 2.8mm, 4.8mm and 9.5mm. The 9.5mm wide terminals tend to be used for higher power applications (such as for starter motor solenoid activation) and the smaller terminals tend to be used for electronics signalling where only very low currents are required. All widths will be compatible with the standard female blade crimp terminals of the corresponding sizes.

Relays can look very similar from the outside so they normally have the circuit schematic, voltage rating, current rating and terminal numbers marked on the body to identify them.

This shows the basic internal circuits (including any diodes, resistors etc.) and terminal layout to assist wiring.

The operating voltage of the coil and high current circuits. Typically 12V for passenger vehicles and small craft but also available in 6V for older vehicles and 24V for commercial applications (both auto and marine).

This is the current carrying capacity of the high current circuit(s) and is normally between 25A and 40A, however it is sometimes shown as a dual rating on changeover relays e.g. 30/40A. In the case of dual ratings the normally closed circuit is the lower of the two, so 30A/40A, NC/NO for the example given.  The current draw of the coil is not normally shown but is typically 150-200 mA with a corresponding coil resistance of around 80-60 W.

Tip: Knowing the coil resistance is useful when testing the relay for a fault with a multi-meter. A very high resistance or open circuit reading can indicate a damaged coil.

The numbers 85, 86, 30, 87 & 87a (or other numbers for different relay configurations) are normally moulded into the plastic next to each pin and also shown on the circuit schematic.

In addition to the basic make & break and changeover configurations above, ISO relays are available in a number of other common configurations which are described in the table below:

* All schematics shown with the relay at rest (de-energised)